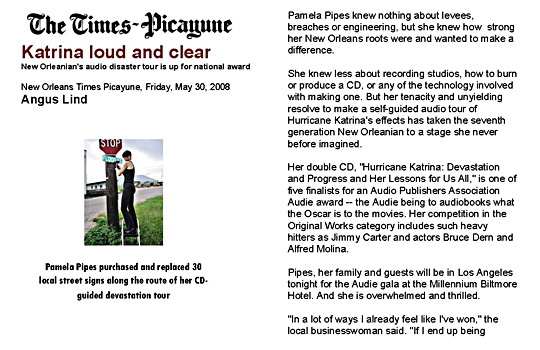 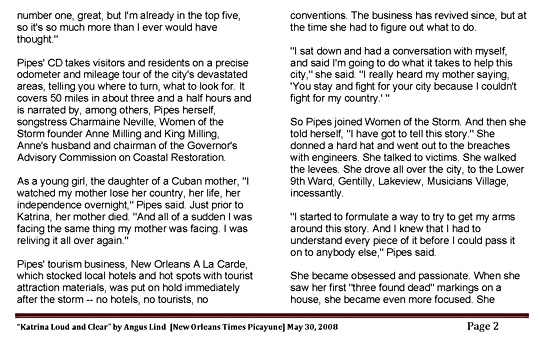 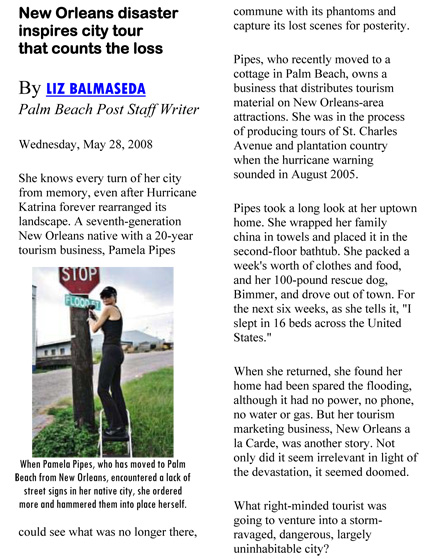 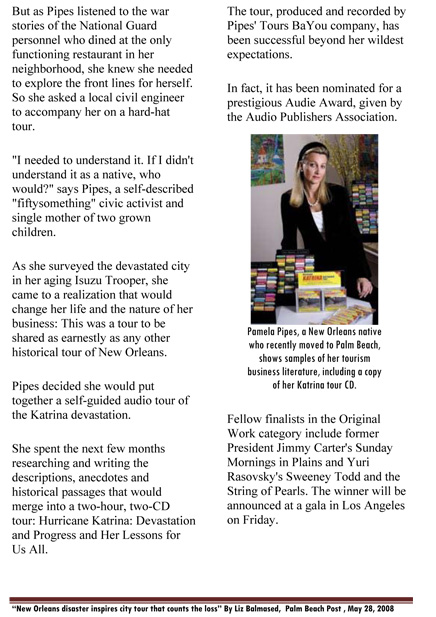 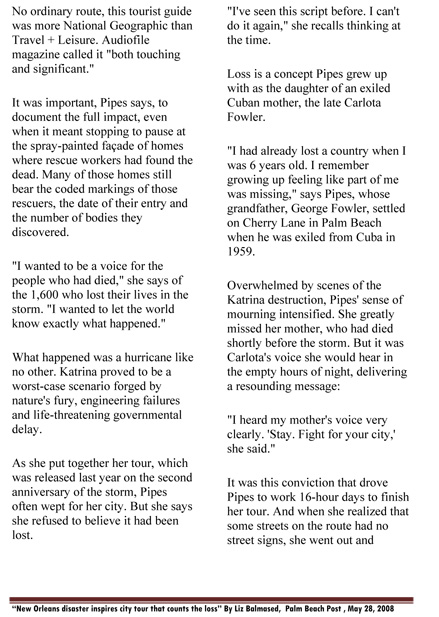 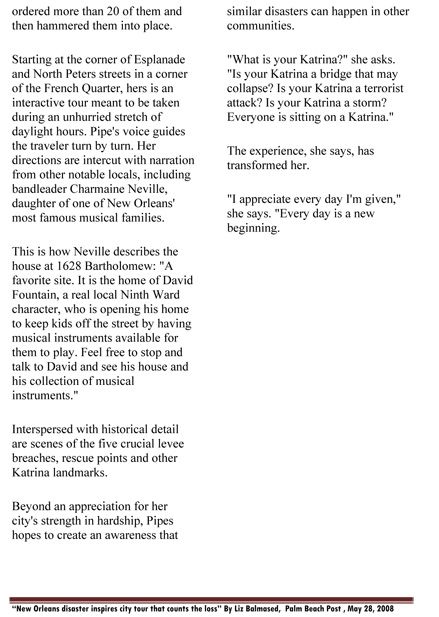 “We did the whole three hours and it was everything you promised. In all honesty, we felt it was a better use of our time than another day at Jazzfest because we really understood the magnitude of the devastation from Katrina so much better than we ever have from news reports.

The CD is extremely well-conceived. It gave us a great tour without any difficulty. Bravo to all concerned.”

Audiofile Magazine, JUN/ JUL 08 issue
HURRICANE KATRINA:
Devastation and Progress and Her Lessons for Us All
Pamela Pipes
Read by Pamela Pipes

“Pipes, A seventh-generation New Orleanian, developed a self-guided tour that is both touching and significant. The tour brings listeners through Katrina-ravaged neighborhoods and the sites of five major levee breaks. Pipes’s careful directions pay particular attention to odometer readings and remind the listener of the potential dangers on the road, such as missing street signs and standing water. Each of the narrators, all prominent New Orleans residents, has something different to offer, from Charmaine Neville, whose tone is both patient and passionate, to King Milling, of the Governor’s Advisory Commission on Coastal Restoration, who explains the levees’ weaknesses and suggests paths for rebuilding. Speaking with tenderness and strength, the guests remind nonresident listeners that Hurricane Katrina didn’t happen on TV–it happened to us as a community and a nation.” A.A. 2008 Audies Finalist ? AudioFile 2008, Portland, Maine [Published: JUN/ JUL 08]

“From the looks of things, tourism in New Orleans has nearly bounced back to its pre-Katrina levels. Most of the hotels have re-opened, restaurants are full, the Convention Center is bustling, and the line for a coffee and beignet at Cafe Du Monde in the French Quarter stretches around the corner by 11:00 on a Saturday morning.

But the truth is that most visitors to New Orleans never leave the tourist areas ? the French Quarter, downtown, the Garden District. These are the oldest areas of the city, and as such, the ones built on highest ground and least affected by Katrina.

It’s a shame there isn’t more encouragement for visitors to get out and see the other 80 percent of the city that is still struggling to recover. A shame, because most visitors are likely to get the false impression that the city has bounced back nicely.

If you do have a chance to visit New Orleans, please take the time to get a sense of the big picture. All it takes is a couple of hours, really. One group, Tours BaYou, founded by seventh-generation New Orleanian Pamela Pipes, has made it remarkably easy to take a self-guided ?Katrina Tour? covering 50 miles of Greater New Orleans in just a few hours.

I happened across the Katrina Self-Guided Tour CD at Cafe Beignet in the French Quarter, which turned out to be worth considerably more than the $19.95 I paid for it. (Click here to order your own copy, or here to download the tour on your computer. A portion of the proceeds go to groups helping rebuild the city.) The tour is easy to follow, and gives very clear driving directions, even for someone who has never been to New Orleans before. It also includes a printed map to help guide you if you have any trouble with the audio directions.

I completed most of the tour in just about two hours. It not only takes you to many important sites, but also gives excellent background information about the failure of the levees and what happened in the immediate aftermath of Katrina. The tour is narrated by a variety of well-known New Orleanians, including singer Charmaine Neville and Women of the Storm founder Ann Milling.

My only criticism of the tour is that it is presented in very unemotional tones, and at times seems rather clinical. I assume this was intentional, as the material is devastating enough and doesn’t call for any overstatement. Still, I’d advise that you bring along a companion to share the experience with; it’s a lot to take in by oneself.”

“Last week was my first trip to New Orleans, and in the back of my mind I wanted to take a tour of the city; however, I was attending a four-day conference with a fully packed daily schedule. I was wrestling with the idea of how could I come to the city and leave without “seeing with my own eyes and heart” some of the devastation caused by Hurricanes Katrina and Rita, and I knew that the tour companies only operate on perhaps a 9-6 schedule.

So, even though I had time available before 9am and after 6pm and there would be enough light, I had no solution. Well, my business partner mentioned that sometimes there are self-guided tours. So, we contacted Guest Services in the hotel and they directed me to the location where we could make a purchase. They also provided a phone number for the company that produced the CD. So, on Saturday afternoon, I purchased the CD with plans to go out early Sunday morning when the sun has come up. Upon reviewing the enclosed map of the tour route, I had a few questions. So, I called the number and left a voicemail message and they promptly got back to me. The woman gave me some quick tips on the maps, but she made sure to tell me that if I just listened to the audio CD it would all make sense.

Well, she was correct. The accuracy of the mileage markers, the numbering on the map, and the photos were all invaluable. It was a great experience and we were able to learn so much while moving at our own pace. The instructions on the CD even allowed us to improvise a bit as part of the “self-guide,” and wander around some different blocks while still being on track.

Overall, a great experience – if the self-guide had not been available, I might have had to make a very unpopular decision and not attend some of the important conference meetings.” 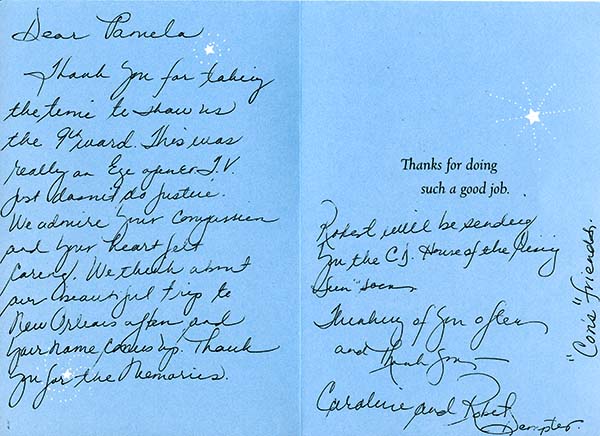 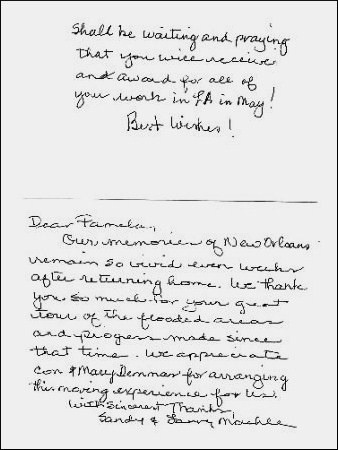 RE: The Flood Tour

“On Friday October 26, 2007 I met my Los Angeles friends for dinner at Luke where they handed me a CD outlining the Flood Tour of New Orleans which they had taken earlier that day and highly recommended. Coincidentally, the creator of the CD, Pamela Pipes, was standing in front of us and introduced herself. She very graciously offered to escort us on the tour.

The following day, five of us loaded into a rental car and took the tour. The CD is meticulously produced with an easy to follow map and precise directions that enable you to witness the devastation wrought by the Katrina disaster. It is one thing to see the events on TV but quite another to actually witness the damage in person.

Listening to the eyewitnesses and local residents describe the events, as you look at the aftermath, personalizes the experience and helps you to understand the profound emotional impact a disaster like this can have on the local population for the rest of their lives.

In a world where we can control nature in so many ways, we sometimes forget its power and how helpless man can be when it unleashes its fury. Far from being exploitive, this tour humanizes and puts you in the shoes of the residents.

The voices on the tour also underscore the rich cultural diversity and priceless artistic contributions this very unique city has made to America’s cultural landscape and why the disaster is such a loss, not just for New Orleans, but for the whole world.”

“Thanks for the superb tour. We found it compelling and interesting, while being easy to follow. The history, descriptions, and commentary taught us so much more than the hours and days of watching it on tv did. Terrific insight from those who lived it and continue to live with the aftermath and unfulfilled promises. Kudos to Harry Connick for the Musician’s village but what a disappointment seeing how little has come from Brad Pitt’s hyped community. Love New Orleans!” 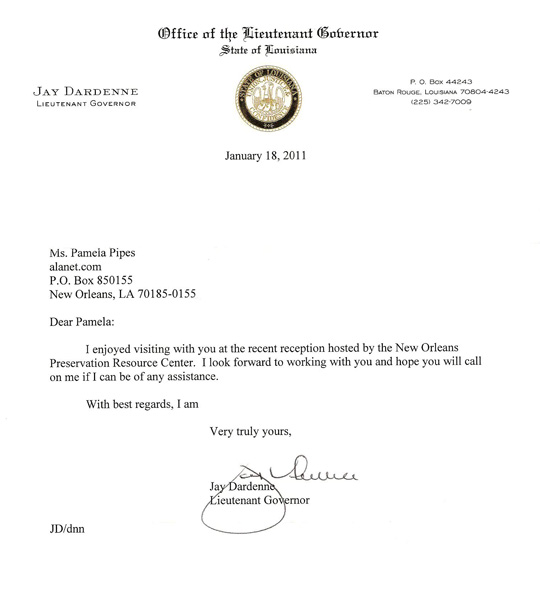